December 5th: We decided to rent a limo this year, while the company Learjet is at the cleaners.
Our destination: the now-traditional Dave & Buster's in Philly.
The cast: Overkill, sans Corrine (who had a subsequent engagement furniture-watching). 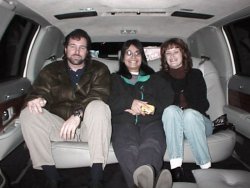 We piled into the limosine in stages. Georgina and I started out, picking up Raquel before we left Absecon. Unfortunately, we didn't get the door locked fast enough and Bill B. crashed the party. En route to Milmay, we realized that we'd forgotten the directions to Marg & Robert's place. We began frantically dialing John to see if he had directions. He didn't, but assured us that he would by the time we reached godforsaken Milmay. 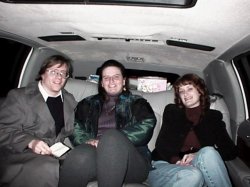 After a scenic stretch of Jersey wilderness, we smelled fire and brimstone and realized we'd reached Milmay. Remarkably, the limo dodged the wildlife and made it down the driveway despite the pits, potholes and what appeared to be tank traps dug in the gravel. Mama Cleveland and the Hanna-spawn waved goodbye from the windows as the limo attempted a 3 point turn amid mutant cats. 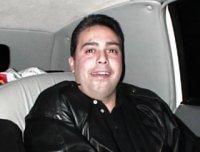 Marg & Robert's place was surprisingly easy to find but surprisingly difficult to reach as we tried the neighbor's driveway first. Slaloming backwards between trees while the Mazzonis strobed their flood lights, the limo finally reversed onto the street and then drove up to their house. The Mazzoni girls came out to see the car but had obviously been warned not to speak to, or accept candy from, anyone inside the vehicle.

Although we got a little lost pulling out of the driveway, we made Philadelphia in pretty good time. 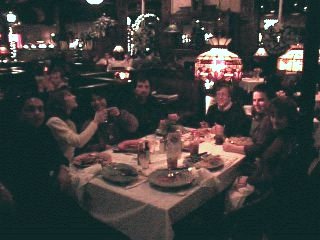 Dave & Buster's was unexpectedly uncrowded and we got a table as soon as we walked in. Dinner was generally excellent, from appetizers to dessert and coffees. Afterward, I gave a short but rambling speech about the year in review or some such. 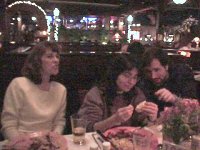 As is customary, I then began to present the MVP of the year award but was interrupted by a bold, butt-kissing attempt by John to make me the MVP this year. The employees, showing absolutely no comprehension of the complex yet arbitrary selection process involved, had decided that I should get it due to the amount of complaining I did bringing the newer employees onboard. As I embezzle far more than the piddly MVP award fee (traditionally a EBX gift certificate and a Useless Gift), I decided to continue with my selection and deal with the attempted coup later.

My selection was Raquel. Although John, Raquel and Marg (when projected out to a full year) were all very close in terms of hours worked, Raquel was slightly ahead of the rest of us. This is all the more remarkable because the Hughes contract limits her to part time and for a couple months there were no other options. She managed to pick up enough work on the UK's New EnRoute Facility, DCCR support, Host support, MARC training system, etc. to slip ahead during the autumn. This year's Useless Gift was a Tamagotchi pet she can take with her on vacation when she must leave her beloved Ringo behind.

Bonuses were distributed; there was much weeping and gnashing of teeth. 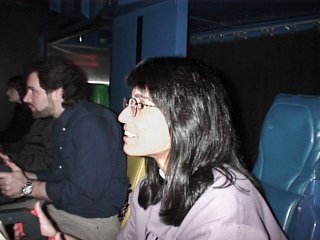 Then it was into the game room for some silver ball and assorted vidgames.

After having underexposed all the dinner photos, I decided to take a flash picture during Multi-Player Galaxian, briefly distracting Georgie and BillB and completely blinding Raquel. 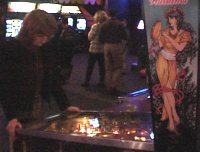 The pinball games present were Elvira's Scared Stiff, Junkyard, Tales of the Arabian Nights, Addams Family (coincidently, Corrine bought one of these a few weeks later), NBA Fastbreak, and an out of order Attack From Mars.

John briefly played a claw machine and made it look easy, snagging a couple toys for Sean and Erin.

We got in some Skeeball, and by pooling our prize-redemption tickets from last visit with those from this visit and adding them to Marg's and Robert's, they could afford a couple plastic pens for their kids. Once we'd cashed in, it was time to go. 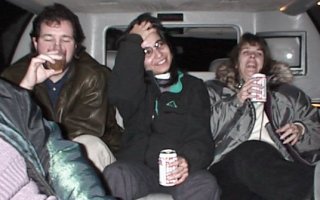 We flagged down our limo, tumbled in, and (except for the broken glass) made it back to Jersey without mishap despite destroying the driver's night vision via indiscriminate flash photography.

Marg kindly invited all of us (including the driver) in to continue the party, but as Robert was borderline unconscious and others had babysitters waiting, we passed.

We dumped the interloper in Egg Harbor Twp., briefly considered swinging by Corrine's and forcing her to party with us, but continued home. We paid and undertipped the driver and bade him adieu.