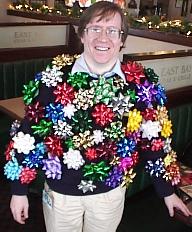 John was born twice in 1963 in the USA (he's got a twin), is Married With Children (2) and currently living in a small town just this side of hell. He is a clever, exceedingly hard-working individual ("individual" being a key word) with an unnatural love of bad puns.

My first encounter with John was a confrontation because he'd enhanced one of my programs beyond usability. We began arguing about software development and haven't stopped yet. This hate-hate relationship has produced hundreds of programs spanning a number of diverse projects and, though I'll never admit it to him, has been a major (positive) influence in all my work.

John started writing Air Traffic Control software for the FAA in 1983. He spent 10 years in En Route Field Support, specializing in Monitor (also working on the DARC interface). He was a founder of Overkill "Classic" in 1987, joined Overkill UK, Ltd. for the year of 1993 and has been with Overkill US ever since.


At Christmastime, he has "amused" his co-workers by:

For more evidence, please see the Geek of Christmas Past.

John has accomplished the following for Overkill: